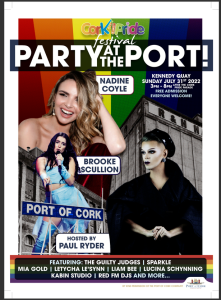 Cork Pride have announced their plans for the 2022 festival, which features guest appearances from Nadine Coyle from Girls Aloud, Eurovision’s Brooke Scullion, alongside Cork Pride favourites and local drag talent.

There are only four weeks to go until celebrations kick off for Cork LGBT+ Pride Festival, which will make its long-awaited return to the streets of Cork city this month.

Now running for 17 years, Cork Pride is the largest national festival of its kind outside of Dublin, bringing approximately 30,000 visitors into the city each year.

The festival will take place this year from 23rd July – 31st July, with the theme ‘Proud to be…’

The Cork Pride Parade will take place on Sunday 31 July, assembling on Grand Parade from 1pm, before starting to move at 2pm.

The parade will finish at a brand new Cork Pride Afterparty venue, down by the Lee at Kennedy Quay at 3pm.

This year’s ‘Cork Pride Party at the Port’ is headlined by Nadine Coyle from Girls Aloud, who’ll be joined by fellow Derry girl, Brooke Scullion from Eurovision 2022, along with Cork Pride favourites, Sparkle, The Guilty Judges, alongside an array of Cork’s finest Drag talent, Kabin Studio, and Red FM DJ’s, all hosted by drag star Paul Ryder.

Please remember WE are a fansite only and have no connection to Nadine, and we DO NOT represent her in any way. If you would like to contact her team, please use the following official representatives: